By the grace of Allah Almighty, Majlis Muqami organised Masjid Fund mini-football tournament on Saturday 29/12/2018 in Dilbeek.
The preparations started 1 month ago in the Amla meeting and committee was formed. Alhamdolillah all 4 regions participated in this tournament. The day started with Zohr & Asr prayer in Bait us Salam Brussels and after that all team members went to sports hall. The opening session was presided by Mohtaram Murabbi sahib. Nazim e Ala sahib gave instructions about the tournament and Qaid sahib Majlis Muqami shared the importance of mosque and our responsibilities. The program started after silent prayer led by Mohtaram Murabbi sahib.
The final match was played between Brabant and Antwerpen, in which Antwerpen won with 3-2.
Alhamdolillah.
The program was very successful and Khuddam enjoyed a lot.
Total donation is over 1000€ Alhamdolillah. 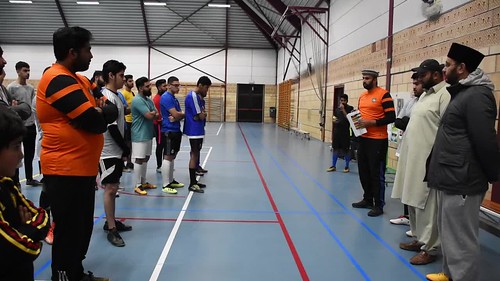